TRUSTING THE LIGHT IN THE MIDST OF DARKNESS 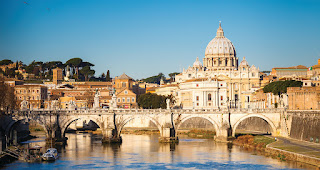 American film company in Italy. We were based in a studio just south of Rome. We shot mainly on a sound stage, but one Friday we had a location shoot in a forest not far from the studio. I went out to the set with per diem and paper work, and then joined the cast and crew for lunch. After lunch I hopped into my tiny Fiat Panda, and figuring that the road I came in on would eventually circle back to the main road, I headed out for a leisurely drive through this pristine forest.

I tooled along on the narrow one lane road enjoying the richness of the forest. There were no road signs and no traffic. I was alone in the forest primeval and loving it. After a while I came to a fork in the road. With no road signs I had to go with my gut. I took the left fork and continued on.
The forest was becoming thicker, and the road narrower. The sun barely peaked through overhead. I began to wonder why it was taking so long to get back to the main road, when I came to another fork. This didn't seem right. I looked at my watch, I'd been driving for over an hour. The drive to the set was only about fifteen minutes from the main road. I thought about trying to turn back, but 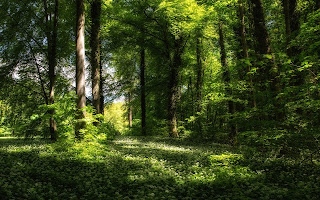 that seemed ridiculous, I'd surely be out of here soon.

I guessed at which fork to take and continued, but I was beginning to feel a little concerned. What if I didn't find my way out of here? No one would even realize I was missing to come to look for me. It was Friday. I was the lone American on the staff. It would be Monday morning before anyone would miss me. I didn't even know if I could remember how to get back to the set. It seemed that I was lost in a dark forest. (No cell phones yet.)
Then a light blinked on the dashboard. The low fuel light. Damn! Now, this was getting scary. I stopped the car to save gas and get my bearings. I was startled by some weird snorting noises then a huge jolt. No one on the road, alone in the dark forest, and now I was surrounded by a herd of wild boars, snorting and bumping up against my tiny car. My heart began to race. I had to get out of here, but there were three wild boars in front of the car. They were each about half the size of the car. I turned on the ignition and slowly inched toward them, but they didn't move. What was I going to do? 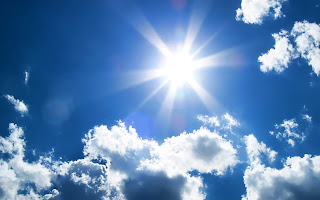 And then I remembered that I was a Lightworker. I had tools to use. I closed my eyes and did a quick little meditation with the white light, expanding the light around the car, and sending light ahead of me along the road. I opened my eyes and the wild boars in front of me were ambling away. YES!
I breathed a sigh of relief, but as I drove on the fear was still gripping my stomach, and I began to cry. As I cried, I felt my heart begin to open and connect with a power greater than myself. Please help me I whispered. Please. I drove on keeping my heart open and sending the light out ahead of me. Fifteen minutes later after a couple more forks in the road I found myself back on the main road. I was out of that dark forest and safe.
As I drove back to the studio I reflected on what I had just been through. And it occurred to me that as terrified as I'd been, I knew somewhere under all the fear that I was safe. That I would find my way out.
Wow! Such a memory. Still, decades later I can feel both the fear and the joy of the miracle of coming out safely. But also I remember that feeling deep down that I would be safe. Looking back now, I see it was a three part process. First, surrounded by the wild boars, I remembered to light my white Star and surround the car with Light and send Light onto the road ahead of me. Second I cried, letting go of the strain through my tears. And third, I called on help from a Higher Power.
Point One - Activate the Light and expand it.
Point Two - Let the emotions out - crying usually.
Point Three - Connect with The Higher Power through asking or prayer.
My story isn't unique. I'm sure you have had at least one time in your life when things were equal to or even scarier than my story. And somehow through a miracle you came out safely.
The Collective Mindset of Fear
For many years this three point process has worked well for me and my students, but recently I realized that there is an additional block to releasing the fear. And what I've found is that because of the current political situation and all its permutations there is a new level of fear. And it is the collective subconscious fear that is permeating the entire population.
This began during the 2016 campaign in the U.S. and then escalated after the election. Though what we are witnessing now in the U.S. is a necessary step in the evolution of the humanity, it is very difficult to navigate, and we need new tools and heightened awareness to stay steady.
We are literally in a dark forest in the collective subconscious, which is created and nurtured by group fear. Because of this each one of our own current personal fearful experiences is fueled, not just by our own fear, but by the collective fear that makes our own fears feel not only larger, but even often to the point of impossible to overcome.
In fact, many people are so frightened that they can't even imagine a good end to the worldwide expression of darkness and doom. And that is where this collective fear is anchored.
The news media keeps the fearful stories blasting at us 24/7. And on social media the people take all that fear and grow it bigger and bigger. The more you give fear a voice by talking about it, the larger it looms. And what we are seeing coming from this is an epidemic of stress disorders, anxiety, depression, Opioid addiction, and suicide.
But the truth is that even in this seeming darkness there


is a Greater Power here


The Light is always greater than the dark. The Light dispels darkness. You just have to know how to connect with it, and then remember to use it to help you transform your fear and open to your own connection to the Higher Power. 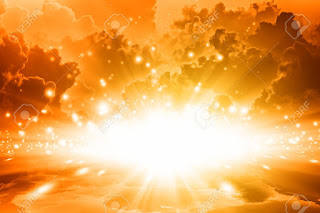 You know deep in heart that you are connected to something much greater than this darkness. You are the Light and you come from the Light, and you have the power to transcend the mass-mind hysteria, and step into your bright power of goodness and love and abundance, and in so doing find your own peace and love and even prosperity. You just need a little Light to disconnect you from the lie and reconnect you to the truth. To the Love.
Light is the vehicle on which Love travels
To jump out of this cauldron of fear you simply need to create a Lighted field to live and play in.
This takes:
1 - A daily practice of meditation with the Light.
2 - Refraining from listening to the toxic news.
3 - Going on a diet of less social media.
4 - Giving up talking about how awful everything is. (This is a hard one for lots of people.) But the more you give a voice to fear and hate the louder it gets.

It takes some discipline and perseverance to do this, but oh, it's so worth it. When you choose to be in the Light no matter what the rest of the world is doing, you will find yourself living a miraculous life unhooked from the fear. And at the same time you will become a shining Light in the world that will begin to punch holes in the collective blanket of fear. You will become one of the enlightened leaders of The New Earth. We only have to heal ourselves to help heal the world consciousness.
Take your power back. Stand in your Light. Stop believing the false facts that Washington and Corporate America are spewing. Start believing in the part of you that will not let you die in the dark forest, but will bring you out to safety.
White Star Meditation
I've made a little Light meditation video that you can listen to daily to help you keep releasing from the collective fear and come back to your own Light. The meditation is just 10 minutes long. Enjoy.


And if you find you need a little help with this or any challenges you're facing, email me, so we can set up a time to chat. I work with the Light, intuitive exploration of your inner landscape, energetic transformation, along with just plain talking, in all my sessions. The first consultation is free and lasts for about 30 minutes. Barbara@BarbaraWilder.com
Sending you much love, light, peace and joyful prosperity,
Barbara
Posted by The Adventure Continues at 6:50 PM No comments: