The Divine Feminine – The Beginning

The is an excerpt from Chapter Three in my forthcoming book -
Creating a Sacred Marketplace
The Divine Feminine – The Beginning
Embodying the Divine Feminine is one of the most important tasks of our time."    -- Marion Woodman?

As we move toward creating a sacred marketplace we need to become more deeply familiar with Divine Feminine consciousness and how it influences our understanding of abundance. Before there was one male God in the Sky, and before there was a pantheon of male and female gods who lived on mythical mountains, there was One Mother God who was all around us.  She was the Spirit of the Earth Herself, and humanity knew nothing else but that they were part of Her. There was no separation between people and the Divine Mother Earth, because the concept of separation did not yet exist in human awareness. We were part of the tribe, which was part of the Earth like the trees, the water, the, animals, as well as the sun and the moon, the sky, and everything that was. There was only Oneness.

As we reconnect money to its spiritual roots we must first get a better understanding of the Divine Mother, or the Divine Feminine. As I wrote in Chapter One, the Divine Mother was revered all over the world in the pre-Dominator cultures. She was known by different names:
Isis, Inanna, Ishtar, Sri, Devi, Lakshmi, Kuan Yin, Astarte, Asherah, Mother Mary, and so many others, depending on the time and the culture. In all, it was She to whom the ancients gave thanks for all the riches of the Earth.

Our ancient ancestors didn't just believe, but rather knew, that all things were sacred parts of the Divine Mother Earth. They were all part of the great Oneness. Each moment was a holy moment, because everything was part of the Spirit-infused experience of being alive. That sacred Oneness — that understanding that the Divine Mother was not something larger and separate from them, but an integral part of them — was all there was. Thus, there was no Heaven or Hell as we might understand them today; there was only the One holy world.

As much as forty-thousand years ago ancient artists traveled from as far away as the Russian Steppes to the Caves of Lascaux in southern France. There, they crawled miles down inside the sacred caves and created magnificent paintings to honor all of Life. My sense is that these sacred caves felt to the ancient people like the very womb of the Great Mother. And in them they must have experienced both a sacred stillness, as well the heartbeat of the Mother Herself. Their paintings were offerings to Her — to the womb from which they came and to which they returned at death.

There was no scarcity or lack for some and not for others. There was just what there was. In times of abundant hunting and gathering there was abundance for all, and even in times of drought or poor hunting whatever these early peoples had was shared equally among them, because the Divine Mother shared equally with all her children in good times and hard times. The sacred exchange of food, the first form of money and the marketplace, was all part of the great Oneness and sanctified by Her great love.

When there is unity we all sit around the fire and eat what there is. If someone is sick and needs more to help him or her get stronger then that is just part of the collective understanding, and all share equally in giving more to the one in their midst who is in need of a little extra. What was most important in the Mother God culture, or Partnership cycle was that the tribe survive and eventually even thrive.

The era of the Divine Feminine lasted for hundreds of thousands, if not millions of years, right up to approximately five thousand years ago when the energy of the Divine Masculine began to come into prominence in human awareness.  Women and the feminine energy was essential for establishing the race. And that took a very long time.

Over these thousands or millions of years, (The first woman’s remains, discovered in Ethiopia, are three million years old.) we developed very slowly. We went through many iterations, with bodies of different shapes, brains of different sizes, different ways of communicating, different methods of hunting and gathering. It took hundreds of thousands of years for us to learn to make baskets, carve bone, light fires, and form muddy clay into pots. All this time we were part of the Great Oneness, and the Great Goddess was all the god there was.

The Mother God was transformed in a multitude of ways as the human race evolved and moved ever so slowly toward separation from Oneness. At first it was as the Triple Goddess. This is origin of the Christian Trinity of today. 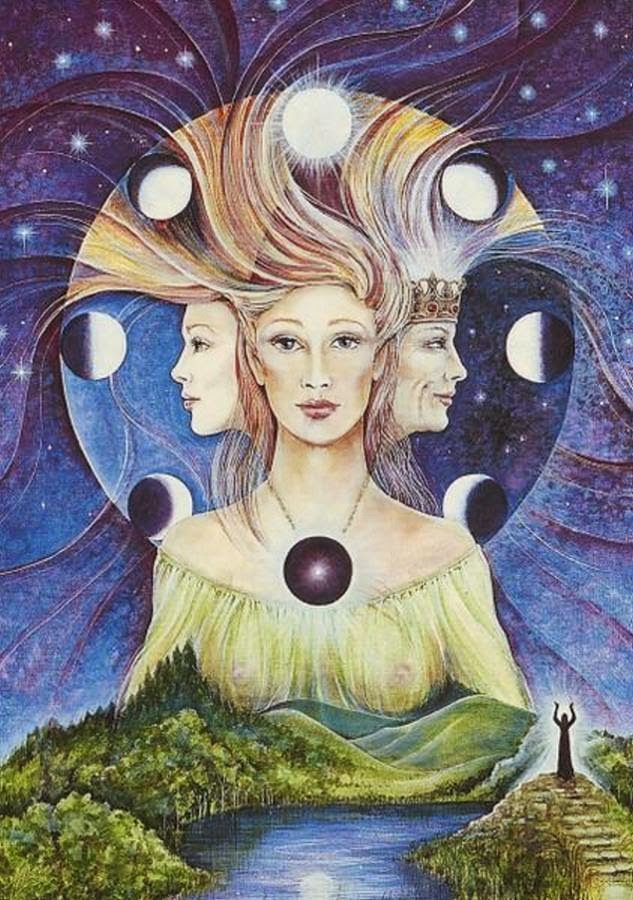 As time progressed the Trinity expanded to include other female deities and they were then joined by a Divine son or consort. It from there that the family Trinity showed up as the Father, Mother, and Son. It wasn’t until Christianity replaced the Mother with the Holy Ghost, who is assumed to be male, that the Divine Feminine was obliterated from theTrinity. But the Holy Ghost was known by the Gnostics as Sophia, the Goddess of Wisdom, who in Hebrew tradition was the original Mother of God before there was Creation.

As this evolution of the Goddess progressed, the Marketplace, and all money exchanges remained in Her realm. The people still understood far into the late Neolithic and early Biblical eras that the Divine Mother was the giver of all abundance.

The Hindu myth of the Goddess Lakshmi demonstrates what happens when the Holy Mother is not honored. 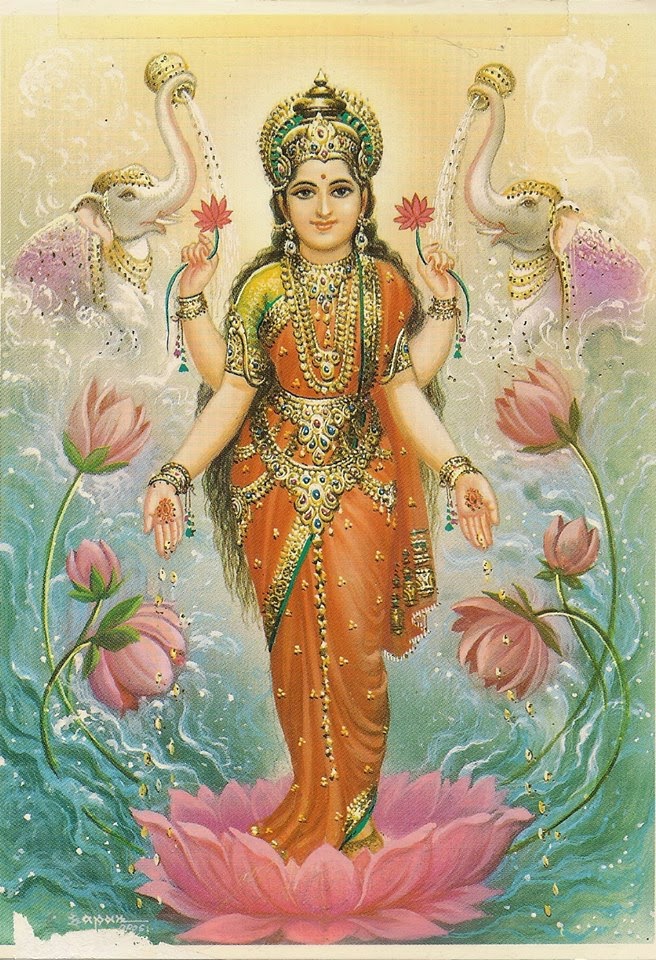 The Goddess Lakshmi is the expression of the Great Mother that represents all the luscious abundance that the Earth offers to humanity — nurturing abundance that flows with ease and grace from Her for the benefit of All. The legends say that all women of the world are forms of Lakshmi, and that where Lakshmi presides, tHere is prosperity, virtue, righteousness, truth, and compassion.

In one particular story of the Goddess Lakshmi we see what happens when the Holy Mother is not honored.

The story begins when Lakshmi is bathing one day in Her favorite lake. She has left Her garments including Her sacred lotus blossom necklace on the shore. Riding along that same shore, Devendra, King of the Gods, carelessly allows his horse to trample Her sacred necklace. The great sage Durvarsa is so incensed by this lack of respect for the gracious Mother of All, that he puts a curse on Devendra so that he might never experience Lakshmi’s abundance again.

Inadvertently, this curse on Devendra deprives the entire Earth of Lakshmi's presence. Without the Goddess of abundance and compassion the land becomes barren, bringing about great suffering. As food supplies begin to dwindle, only the wealthy kings who have great stores of food are unaffected. As the people across the land starve, the kings continue to feast from golden plates. This division between the rich and the poor pleases the demons that partner with the kings and celebrate and fuel their greed.

Eventually, of course, even the stores of food in the palaces begin to run dry. When they start to go hungry as well, the kings realize their folly and appeal to the gods to intervene and bring Lakshmi back.

The gods, recognizing that the Earth cannot survive without Lakshmi and Her gracious abundance, send out search parties to find Her. They learn that She now resides under the Sea of Milk. The gods know She will not be brought back easily. They know She will not just come because the gods who had so easily shunned Her want Her back. Nor would the wishes of the powerful kings be enough to convince Her to return.  It will, they realize,  take the power of all the gods, all the mortals, rich and poor, and even all the demons working together to churn the Sea of Milk to bring Her back to the Earth. The mortals are quickly convinced to join in the effort. But it takes much politicking for the gods to convince the demons to join.  Only when the gods promise that once Lakshmi is restored to Earth, the kings will regain their wealth and again turn to the demons to support their wars and greed do they reluctantly agree.

Everyone gathers on the shores of the Sea of Milk and using whatever implements they have brought with them, they all begin to churn. And they churn and churn for many days, but to no good outcome. Lakshmi does not appear. The demons are gleeful, and begin to depart rejoicing in the failure of the gods.  But just at that moment Lakshmi rises up out of the Sea of Milk, standing on a great fuchsia colored lotus blossom, golden coins, all the abundance of Her sacred realm, pouring from Her hands. She brings with Her too, the ambrosia to heal the land and infuse the Earth with Her riches once again. But, as the people and gods celebrate with great joy to honor and give thanks to their great Mother, the demons steal the ambrosia. Lakshmi, disgusted with the gods' and the peoples’ carelessness with Her sacred gifts prepares to return to the Sea of Milk.

The great God Vishnu, the preserver of the Universe, has been watching. He cannot stand by any longer. He knows the immense worth of the Great Goddess and he also loves the people and the Earth. So, disguised as a beautiful  seductress, Vishnu arrives, and Lakshmi recognizing Vishnu in feminine form, delays Her departure. Vishnu coaxes the ambrosia from the demons, with the promise of sharing it equally between the gods, the mortals, and the demons. The demons give in, seduced by Vishnu’s feminine charms. Vishnu fills everyone’s cups with the ambrosia. But as gods and mortals celebrate the demons collapse in death. The ambrosia was the essence of pure love, and evil cannot withstand that powerful elixir.

Lakshmi reigns as Mother of the Earth once more, bestowing all Her riches on the people of the Earth, Her beloved children. Instantly springs gush up through the parched earth, streams begin to flow, grass, trees, flowers, and vegetables grow, bloom, and bear fruit. The animals that have been dying in the wasteland drink from the new lakes and rivers and revive.  Lushness abounds throughout the earth.

We are living in a time when the Divine Mother has been shunned and the earth and the prosperity of the people is a dry parched land.  The demons, so easily foiled in the Lakshmi myth, have yet to be overcome. But we all hold the ambrosia, which is pure love, in our hearts.  And as we begin to transform the collective subconscious beliefs around money from the false belief that there is not enough to go around, and open our hearts once again to the Divine Mother, and Her love for us, we will begin to shift out of the old fear-based economy and into the Love-based economy in which the Divine Mother shares abundantly with us ALL.
Excerpted from Creating a Sacred Marketplace – by Barbara Wilder


Copyright © by Barbara Wilder 2014
Posted by The Adventure Continues at 6:04 PM